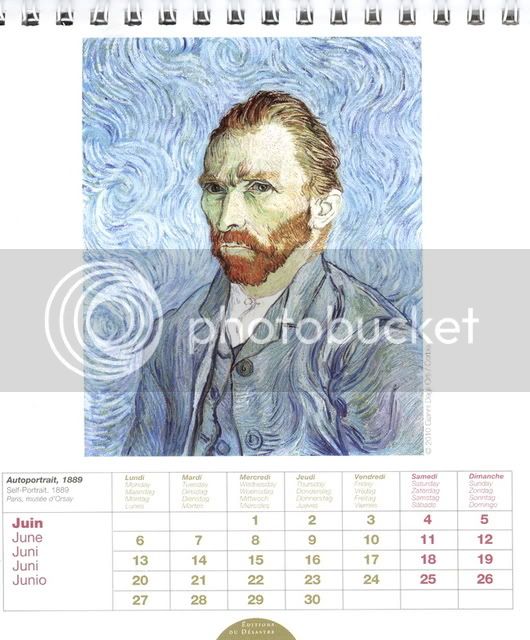 and relatedly, a personal favorite (for which i woefully neglected to note the creator when i acquired it):

relatedly, i recently, quite luckily, stumbled upon a print of this fabulous portrait of my favorite artist at a nifty art store i'd never known about and now that it graces my wall, i can say that even sober, it is truly magical in its ability to mess with one's perceptive equilibrium.


also, i love that he's changed vincent's eyes of blue to mine of green and brown. if only i could grow a beard that red.

the reason i love so much more art that's mostly in-and-of-itself complete, like songs (instrumental music moreso) and self-contained visual art (paintings, sculptures, grand canyons, etc.) is because i always want to know more with the narrative and otherwise word-based forms, in order to better appreciate them. which is not to say that it doesn't often help to know more for the former, just that they're more often and to a much greater degree, instantly, viscerally affecting. to make an example using the former, i'm late to the party in hearing about my new friend ron english's abraham obama. now, picture (and i insist plenty exist) one of our completely and willfully uneducated ignorami that wander the streets of boston (or any city) who is unaware of abraham lincoln. will not recognize him if shown a photo. to that person, it's just a weird picture of obama, they can't appreciate it. (and still further imagine the few who recognize neither man.) and yet, those individuals would still be able to appreciate an interesting colorful portrait, inasmuch as i would, if english had crossed a portrait of dr. egbert guernsey with dr. jonas salk. while interesting colorful portraits are all well and good, a fully appreciated abraham obama is far more fulfilling an experience.

i've noted this in the past as being the basis for my failure to (once having begun) read finnegan's wake. sure, there may be a good deal of fulfillment to be taken from my doing so, but in consideration of the vastly more fulfilling experience it is for those who can appreciate its depths, well, let's just say the constant reminder of that poisons the already diminished value. like if i were to go to a night club in bangladesh (the present-day borders of which were established in 1947, which i wouldn't have known sans wiki), and (as it goes in science fiction and fantasy films), the bangladeshi standup comic is speaking english (rather than bengali) and the entire bangladeshi audience understands english, in order that i, the true audience, could perfectly understand her, and she told a bunch of jokes about living in bangladesh and bangladeshi politicians and celebrities, i might understand some of them in principle (ha-ha all politicians are lying, philandering scoundrels), and might laugh occasionally, but the overall experience would not be worthwhile (for the standard comedic experience -- as an exposure to a different culture, it could have some value, but certainly there'd be better ways to accomplish that).

and i could read a companion book which explains all the references, parallel in time, or afterwards, but "it's not very funny if you have to explain the joke." and like david lynch says in explaining why he doesn't do director commentaries, the work should (generally, i add) speak for itself, and looking too closely at how it was crafted takes away from the experience of the whole work.

which is a digression related to the fact that i am constantly wishing i had the internet (and wiki) at hand, especially when reading.

so that when a question occurs to me, like one did mere (but it's getting to be more and more) moments ago, such as 'what is the ideal length of time for a relaxing bath?', i can find out some opinions on the matter. and then learn that in 1857 a dr. egbert guernsey published a tome by name of homoeopathic domestic practice : containing also chapters on physiology, hygiene, anatomy, and an abridged materia medica in which he stated "in a swimming or tub-bath it is best to remain for only a short time." and it makes me happy to know that there once was a man named egbert guernsey and that there probably never will be a man named egbert guernsey again on this earth. and that if i did a quick search on namebook 1857 (in the future, namebook (a google subsidiary) will provide facebook-style pages for every person who ever lived, some of which will be updated with new material by ghosts. how very soon in the future i won't say.) i would find that there were in fact at least 14 men named egbert guernsey alive at the time, not counting those who've set their privacy so they don't come up in searches, at least five of whom were doctors).

and of course, none of this information (i.e., bangladesh's border date, dr. guernsey's very existence, dr. guernsey's opinion on the ideal length of a tub-bath, namebook's very existence, the number of egbert guernsey's alive in 1857), although factual, should matter a whit to you, and you'd have been better off reading the nutrition panel for whatever item of breakfast food you eat, because that at least would be reasonably useful information. and while i'm terribly sorry to have wasted your time, i can predict with a good deal of certainty that i'll continue to do so in the future, if obliged, because i tend to be interested in information that doesn't matter a whit to almost anyone (always with a few exceptions, students doing a biographical report on dr. egbert guernsey might google upon this entry).
Collapse