rays-royals game postponed due to snow

fat flakes were sticking to the field, and members of both teams popped out of their dugouts to take in a spectacle more suited to january or february. there hasn't been measurable snow in may in kansas city since 1907."

it's a shame we don't have any interleague games against the cubs this year, but it was nice to see we play seven against houston, who have the lowest payroll in the league, a miniscule payroll, including four at home starting last night. of course i didn't expect a game against these doormats to go until the 14th inning. so last night, while watching the red wings blow a 4-1 lead and head into extra time as well, i happened to see on my computer that the tigers had loaded the bases and that my tiger, don kelly, who's still clinging to a roster spot, was up to bat. i changed the stations literally "just in time" to see him hit an rbi single, his first rbi of the year, and give the tigers what ended up being the winning run. that's my tiger. the tigers' jones index is down to 78 which is how warm it was yesterday afternoon.

then to cap things off, the red wings quickly scored in overtime so that people could get some sleep. a win is a win, i guess. 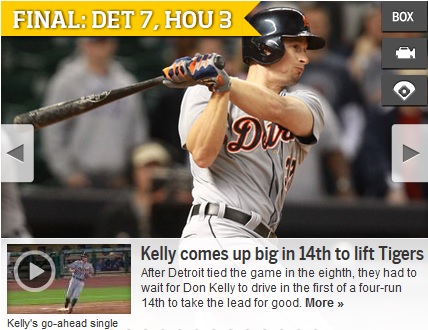 although i've started to use cash instead of plastic more frequently, it's still very seldom i get a where's george branded bill.
and then the other night, when paying for gas and lotto, i paid separately for each transaction and used a twenty on the ten-dollar lotto purchase despite having received in a ten in change from the gas purchase. and was rewarded by receiving a where's george branded tenner. (i guess that would make it a grace note.) and it's the best i've ever received, having come from the exotic locale of fernandina beach on amelia island on the north coast of florida. and it wended the 800+ miles in 304 days to my hands without another soul opting to input it into the wg database. i've been saving it to spend when i'm somewhere much more exotic.