i don't know if our holiday friends are being tortured or pressed into forced manual labour. either way, i've sent out a call to yukon cornelius to come and free them from my neighbour's clutches. 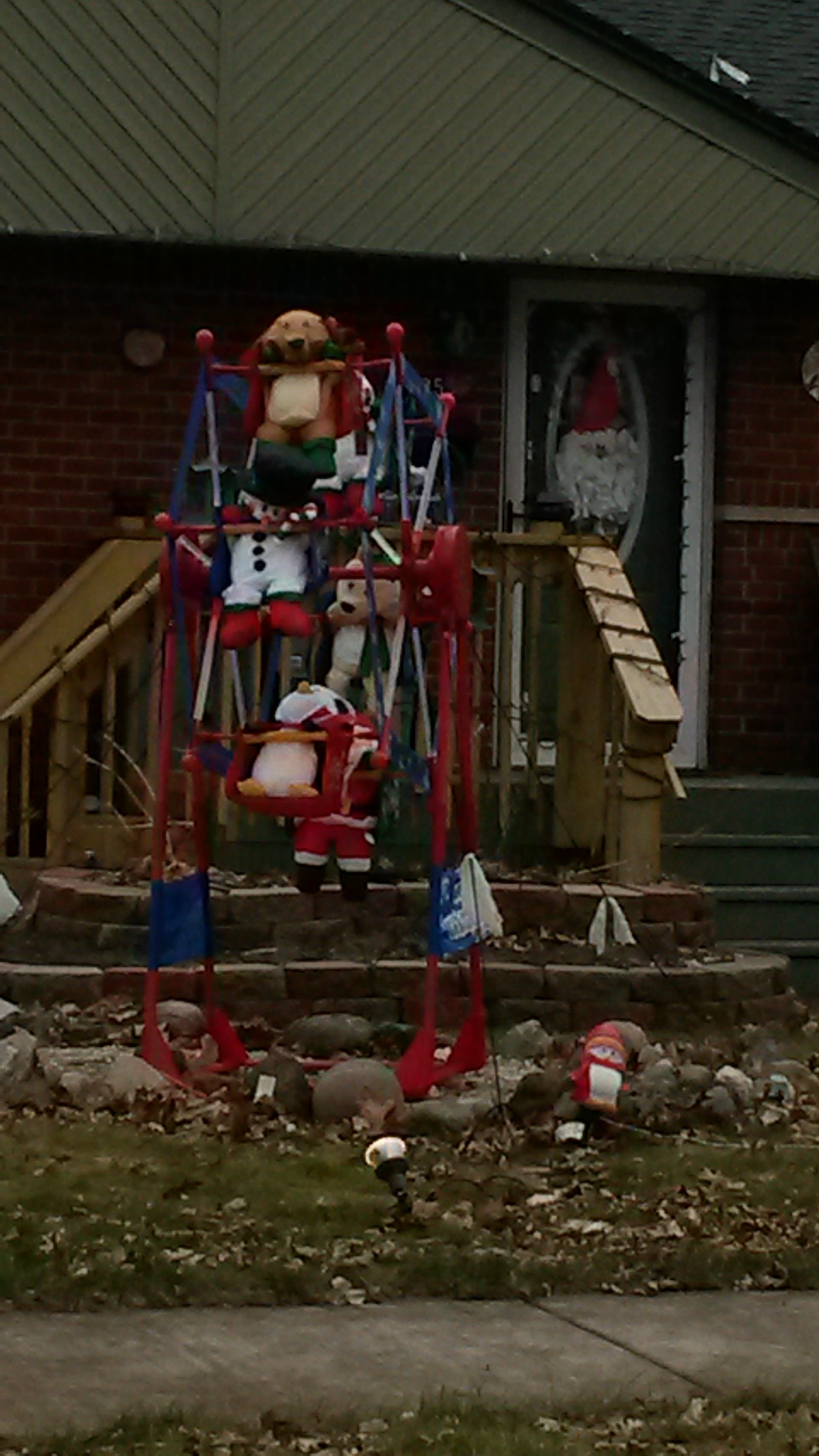 "if a touch of giddiness and euphoria has entered your state of mind, chalk it up to last night's monthly lunar conjunction with jovial jupiter."


i was outside just a bit ago. it's nice to be outside for a bit in 30 degree air without a jacket after hours inside a 72 degree house. the fullish moon was still brightly shining, arm in arm with jove. it's been a good week of full and fullish moons and skies clear enough often enough to see them. when i was outisde the moon and jupiter were hanging out with gemini. my moon is in gemini.


in the photo below, taken a couple days ago and earlier in the evening, jupiter is among the branches. the flash on the camera-phone isn't good enough to allow to really see the heron in my neighbour's yard (the one i mentioned last winter when it was constructed). 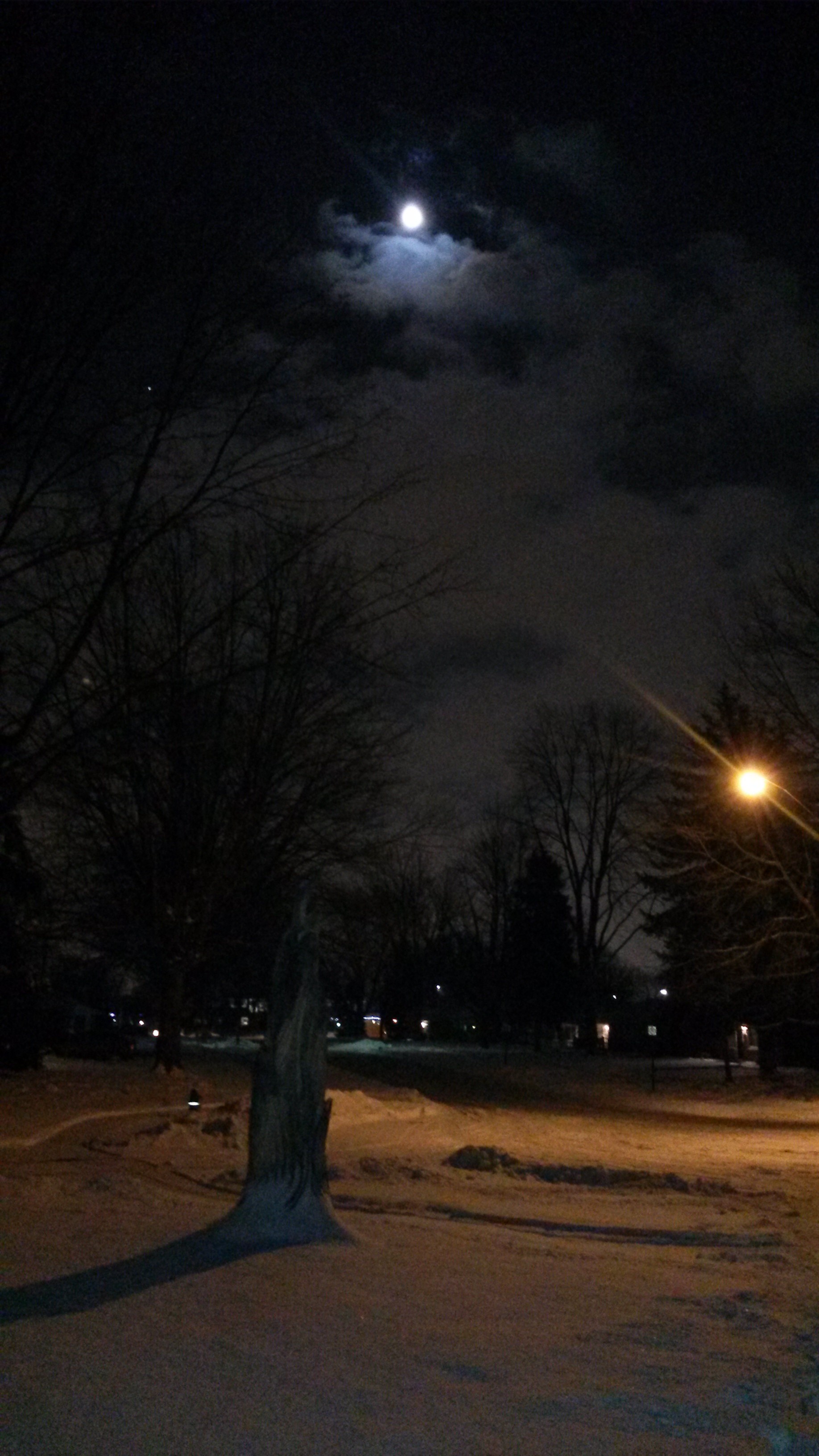 whatever else they were called, they were sure to be called "union headquarters," and to hold out a welcome to workingmen; and there was always a warm stove, and a chair near it, and some friends to laugh and talk with. there was only one condition attached,--you must drink. if you went in not intending to drink, you would be put out in no time, and if you were slow about going, like as not you would get your head split open with a beer bottle in the bargain. but all of the men understood the convention and drank; they believed that by it they were getting something for nothing--for they did not need to take more than one drink, and upon the strength of it they might fill themselves up with a good hot dinner.

occasionally, from some hunter or forest-ranger, we gained little items of information, we learned the fascination of musical names--mono canyon, patrera don victor, lloma paloma, patrera madulce, cuyamas, became familiar to us as syllables. we desired mightily to body them forth to ourselves as facts. the extent of our mental vision expanded. we heard of other mountains far beyond these farthest mountains whose almost unexplored vastnesses contained great forests, mighty valleys, strong watercourses, beautiful hanging-meadows, deep canyons of granite, eternal snows. mountains so extended, so wonderful, that their secrets offered whole summers of solitary exploration. we came to feel their marvel, we came to respect the inferno of the desert that hemmed them in.

at the sight of the sea, mrs. elphinstone, in spite of the assurances of her sister-in-law, gave way to panic. she had never been out of england before, she would rather die than trust herself friendless in a foreign country, and so forth. she seemed, poor woman, to imagine that the french and the martians might prove very similar. she had been growing increasingly hysterical, fearful, and depressed during the two days' journeyings. her great idea was to return to stanmore. things had been always well and safe at stanmore. they would find george at stanmore.

it was with the greatest difficulty they could get her down to the beach, where presently my brother succeeded in attracting the attention of some men on a paddle steamer from the thames. they sent a boat and drove a bargain for thirty-six pounds for the three. the steamer was going, these men said, to ostend.

"no, you will not return," muttered mrs. almayer, prophetically.

"without you he will not go, and if he remains here--" she waved her hand towards the lights of "almayer's folly," and the unfinished sentence died out in a threatening murmur.

the two women had met behind the house, and now were walking slowly together towards the creek where all the canoes were moored. arrived at the fringe of bushes they stopped by a common impulse, and mrs. almayer, laying her hand on her daughter's arm, tried in vain to look close into the girl's averted face.

"it will be difficult even for you and me to get through without tearing our dresses," said ozma, "so we must leave the sawhorse and the wagon here until our return."

"i cannot tell, dorothy dear, but i know we've been going in the right direction, so we are sure to find it in time."

should she proceed no farther?--should she let it pass, and seem to suspect nothing?-- perhaps harriet might think her cold or angry if she did; or perhaps if she were totally silent, it might only drive harriet into asking her to hear too much; and against any thing like such an unreserve as had been, such an open and frequent discussion of hopes and chances, she was perfectly resolved.-- she believed it would be wiser for her to say and know at once, all that she meant to say and know. plain dealing was always best. she had previously determined how far she would proceed, on any application of the sort; and it would be safer for both, to have the judicious law of her own brain laid down with speed.

but all remembered beauty is no more than a vague prelude to the thought of you -- you are the rarest soul i ever knew, lover of beauty, knightliest and best; my thoughts seek you as waves that seek the shore, and when i think of you, i am at rest.

"it was, indeed," agreed the woggle-bug. "i have never ceased to congratulate myself for escaping while i was highly magnified; for even my excessive knowledge would have proved of little use to me had i remained a tiny, insignificant insect."
Collapse