i first met (read) terry pratchett in 1987 with mort. i spent a lot of time with him over the next eight years and then not so much since even though he continued to write. i just haven't been much of a reader in so so so long. and i was off meeting new people when i was dipping my toes in. the nice part about that being that i knew that i would be able to come back later and what he'd written since would always be there. even now that he, like so many others, no longer isn't.

i was reading the thing that neil gaiman wrote about him when he learned that terry wasn't to be here much longer, about how pratchett was driven in his writing by anger, a righteous anger typically at all that is wrong with the world. just then moby's everything is wrong (quiet mix) came on. just right. and then i was reading pratchett's bio at wiki and about how he'd been knighted and made his own sword and then i get so lonely (o baby mine) by the four knights came on. thanks bythos.

i'm finally doing the super serious packing now that we've picked out a house to rent in pittsburgh. among the 'very important books' section of the living room bookshelves (you can be certain that beside the various there are works by kerouac, bellow, bloom, william flesch & laura quinney, merrill, dick, kim stanley robinson, delaney, leguin, and zelazny) are the hard cover copies i have (not from my youth but acquired in my 30s) of the first three discworld books pratchett authored: the colour of magic, the light fantastic, and equal rites. i'm sorry to learn that the mad cow robbed him of more time to enjoy life and vent his anger, and at such a young age.

the coat of arms of sir terry pratchett (i must say i quite admire it): 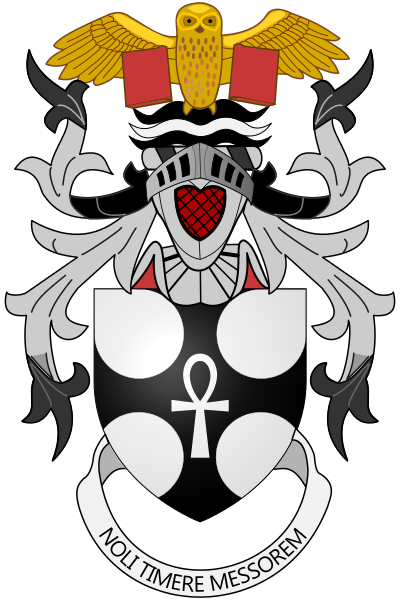 i'm trying to cut down on the number of open tabs i've left lying around my browser and so here's a thing i meant to post about:

a fair while back i got a fortune cookie at our favorite chinese restaurant out here that i found meaningful as always. it read:

the phrase itself must be fairly old because i found it on google books in a 1904 book, forty thousand quotations, prose and poetical: choice extracts on history by charles noel douglas (747). a weird choice for a fortune, i thought, and not very interesting to most, but as a lawyer i dug it. that's all.

despite paying perfect attention to the bills that cross my path i have very rarely encountered where's george bills since i first learned of the phenomenon many years ago. (to be fair, as i've said, i don't utilize cash all that often (who does anymore, really?)). i got one on a twenty from the atm the other day and quickly registered it with the site. i was pretty thrilled with what i learned. the bill had managed to go almost eight (!) years without being registered by anyone (this is a strong indication of how few people care about where's georgeing -- presuming that the original georger had put it into circulation shortly after registering it). anyway it traveled 477 miles to get to me in 7 years and 147 days (rounding up from 146.4167 days). ha! the original georger was in blauvelt, new york, which is a hamlet (!) sized about 4.7 square miles located about 27 miles away from any part of new york city i've been to. it sounds like a reasonably interesting place, this blue fields. 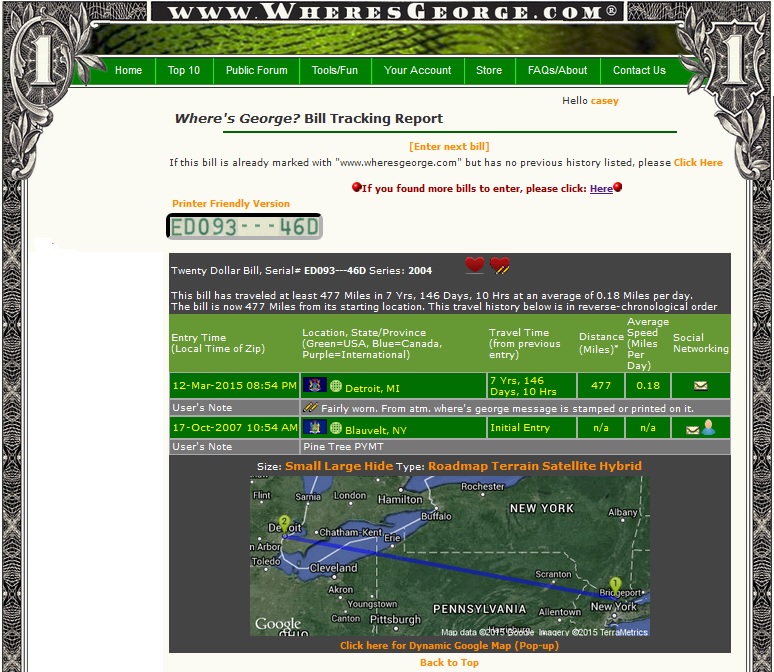